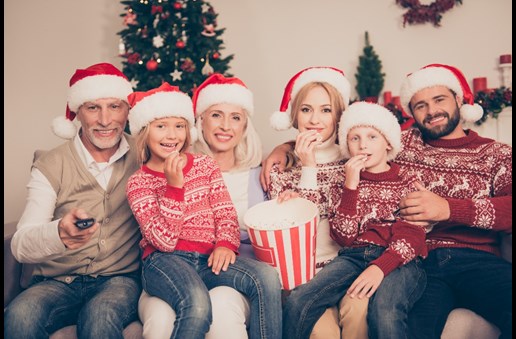 There’s nothing better now the festive season is upon us, than snuggling up with hot chocolate to watch a selection of family Christmas movies.

We’ve compiled our favourites for you – to keep adults and children alike entertained on those cold winter nights.

If you haven’t seen these before, you don’t know what you’re missing.

Look out for this among the family Christmas films being shown on TV over December. Michael Keaton stars as a musician who takes his family for granted in his pursuit of rock stardom. When he is killed in a car accident on Christmas, he finds himself being brought back to life as a snowman, to help his son Charlie get over the grief of losing him. If you’re picking up a copy on DVD, don’t confuse this 1998 Warner Bros comedy with a 1997 horror movie of the same name.

Who hasn’t seen Will Ferrell’s much-loved portrayal of Buddy the Elf? This has fast become a firm family favourite – particularly for adults who enjoy the humour as much as youngsters. Having spent his life in the North Pole, Buddy discovers he is not a real elf, but a human with a father who lives in New York. Setting off to find his Dad, Buddy’s optimism and innocence charms the cynical people he meets in the Big Apple.

One of those classic Christmas movies for kids which they never tire of. Kevin finds himself left behind when his family fly off on a festive break to France – and he’s got to defend his home from burglars who call themselves the “Wet Bandits”. Merry Christmas, ya filthy animal!

This computer animated musical fantasy film, based on the classic children’s book by Chris Van Allsburg, follows a young boy who embarks on a magical adventure aboard the Polar Express, learning about friendship, bravery and the spirit of Christmas.

A divorced dad unwittingly knocks Santa off his roof on Christmas Eve, and finds himself subject to a contract clause which states he must take his place. Refusing to believe this is real, he finds himself unavoidably gaining weight and growing a white beard over the next few months – and discovering his night at the North Pole wasn’t a dream after all.

This film was originally released in 1947, although a remake was produced in 1994. It centres around a little girl whose mother hires a new department store Santa by the name of Kris Kringle, who insists he is the real Santa Claus. He becomes an instant hit – but some people claim he’s unwell and try to get him hospitalised, leading the girl’s mother and her lawyer boyfriend to come to his defence. Can he make believers out of them all?

Good Christmas movies for children don’t come much better than this animated tale of Santa’s clumsy son Arthur, who becomes the unlikely festive saviour when a child’s gift is misplaced. Will she wake up on Christmas morning and think Santa has forgotten her?

This classic tale of Ebeneezer Scrooge learning the true spirit of Christmas is made a little less scary by Jim Henson and his puppeteers, who put Kermit the Frog and a cast of Muppets in the main roles.

Vince Vaughan stars in this tale of Santa’s older, troublemaker brother, who is bailed out of trouble by his saintly sibling in return for coming to the North Pole to help prepare for the festive season. He causes chaos in his wake, but ultimately helps save Christmas from an efficiency expert who is determined to shut Santa’s operation down.

Before Buddy the Elf there was Patch, played by Dudley Moore in this 1985 classic movie tale. Disgruntled not to be given a much-wanted promotion by Santa, Patch leaves for New York and unwittingly threatens the fate of Christmas by taking a job at a toy company run by a scheming businessman.

So, that's what to watch with the family sorted... We'd also recommend 'Love Actually' to get you feeling festive whilst wrapping the pressies!

Keeping Your Kids Entertained During the Christmas Holidays