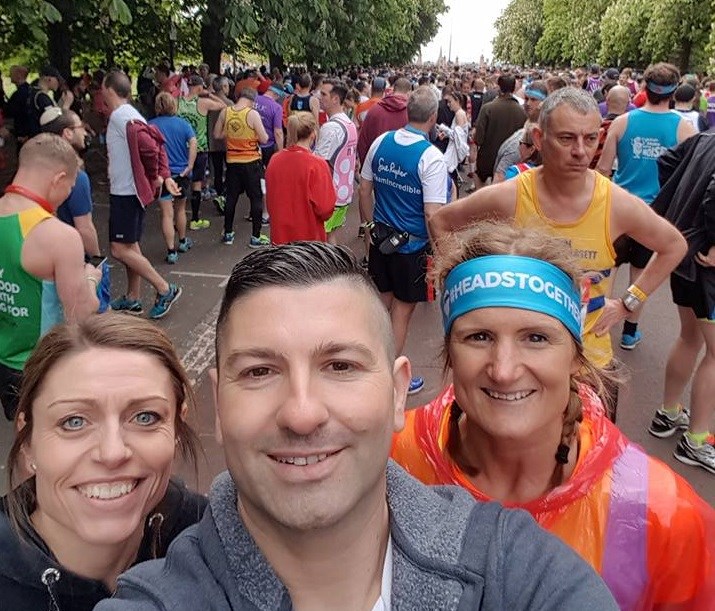 So this is how it went. It is longer than the others but then 26.2 miles is a long way!

For the first three miles I was almost giddy with excitement and energy. I had a compelling urge to shout “We are doing it, we are running the London Marathon!” to everyone around me. I didn’t as it was fairly obvious, instead I just smiled. I say I smiled but it was the most ridiculous grin that stayed on my face for most of the route. Photos at the end!

Joining up with the blue start runners around 3 miles was a surprise feeling. I was already running flanked by a vast amount of strangers who I felt an instant connection with, however, when the blues joined (even more strangers) it felt as if they were long lost friends. There is a real sense of being in it together, so many different abilities, reasons for being there, stories to the start line, but the start line, red, green or blue is the only factor that matters on the day. It makes us the same. I also ignored another compelling feeling to shout welcoming comments to strangers as we merged.

From about 4 miles the crowds start to build. I had been told about the enormous support from the crowds which is absolutely spot on. There was one group on a balcony, the men were dressed in black tie and the ladies were in red ball gowns. They had made spectating into a party. Their music was blasting out and could be heard from the road, they were cheering and raising their glasses to us as we ran past and were as much a part of the race as the runners were. Seeing other people enjoying themselves is uplifting in itself, so the fact they are there to support you and basing their party around everyone’s efforts is fantastic.

The other highlight of supporters are the children who have their hands out for high-fives. The best is when there are about five or more in a row and you can hit all of them – bop-bop-bop-bob-bop! That is an energy lift right there! They laughed, I smiled, parents cheered, it was great!

Around 5 miles there is a metal bridge and underneath is a band and their music echoes all around the bridge. You can feel it through your pace and the smiles gets bigger. Running through Greenwich is also a real treat. The maritime museum is a beautiful building that shamefully I have never been to before. The stark white brick work against the bright blue sky of Sunday and the green lush grass was definitely something to admire running past. Then of course comes the Cutty Sark which you run all around. This did not leave me much further to go until my first family cheering point. My Mum lived in Deptford Fire Station as a child (Grandad was a fireman) so that is where she planned to be. The orange brick building is easily spotted, but no family. They were further up so I only caught them as I past, but importantly I saw them and they saw me. A personal cheer from those who know the four months that got you there is special.

The next highlight is after 12 miles. Shortly after the marker, the route makes a sharp right turn and as you turn the corner, in front is Tower Bridge. Looking up at these iconic towers and hearing the screams of the crowd is breath taking. As a powerful icon of London it is used in a lot of VMLM marketing, to then be at the point that you have seen in so many photos, is really being part of it. At this point I gave into my compelling vocal requirements and turned to a runner and cheered “Tower Bridge Woo Hoo– we made it!”

At 17 miles as a complete surprise to me I got a stitch. It was right in my rib cage not on my side as they usually are and the pain brought me to a walk. I had planned for when it got tough and prepared a mental self-speech which I went through. After two or three 20 second bouts of walking and breathing (a technique advised by a runner who could see my issue) I also had some jelly babies (supplied by spectators) and managed to plough on. The ridiculous grin had left me, 17-20 were very much head down plods, right foot, left foot, right foot etc. However, at no point did it cross my mind that I would not finish this. I had read “Running like a girl” (Alexandra Heminsley) who brilliantly details the mental challenge (thank you Michael btw for the book). I was prepared and was expecting it, so when it got tough my mantra “Long and Push” (long strides and push from the back foot) kept me going. Being prepared is a long way to winning.

20-23 were weird. They was a constant roller coaster of being energised and able to smile and play the high-fives game again whilst thinking it is only about 10k to go. But then literally the next second back to head down plodding. This is where the crowd really helped. There are some spectators who pick you out from about 20 yards away and then shout your name with a deep guttural volume; they watch you approach, gain eye contact, whilst clapping and cheering “C’mon Sarah, you can do this”, “Go Sarah, you’re so close” and maintain eye contact until you pass. They mentally will you on and want to do all they can to get you through the moment. It is as if those 20 yards as their responsibility to ensure you pass energised and supported. I was really fortunate and went from one to the next and next, and without realising it passed what could have been a tough half mile but these connections with the spectators, brings you out of the plodding and into the energised zone. I could not have done it without them.

Mile 23 – more emotion! I have never run that far in my life, cue tingly nose feeling; it is only 5K to the end, cue choke in the back of my throat; I will be finished in 30 mins, almost full on tears which by trying to hold in managed to produce a sound that can only be akin to someone having an asthma attack! Thinking about it, that is probably why the supporters really got behind me!

Running along the embankment, seeing Big Ben in the background, running through Westminster and about 1K from the end, my second family cheer spot! I was elated to see them at this point. I had the same issue as in training, getting near the finish and wanting to stop but kept going and as you round the corner to the final stretch the 385m arch is the best thing to see.

I crossed the finish line at 4:35, elated, partially surprised and still with that ridiculous grin on my face!

I wish to thank many people for getting me there. All the fundraising support from friends, family and colleagues. Training support from Godmanchester Running Club, my brother Michael and Rob and our girls. The interest in my challenge from everyone and the big number of people that were tracking me on the day which I only knew afterwards – thank you!

I have also received many kind wishes of good luck before and well done afterwards. They have ranged from cards, lengthy social media posts and by contrast this brief yet still supportive text exchange Sunday evening:

Lastly, rather unusually an apology to my Mum. I have not detailed that actually I have a ‘dodgy’ hip which I have had two operations on and previously has given me a ‘bit of jip’. I know when I announced my entry I would have caused many worrying moments for my Mum, who did not think I should be doing it purely over fear of more damage but also never said anything directly to me and only offered support. Apologies for the worry and thank you for the support. X

All the support has been appreciated and I absolutely could not have done it without it. I highly recommend VMLM to anyone, only you put restrictions on what you can do. Go for it, you won’t regret it! 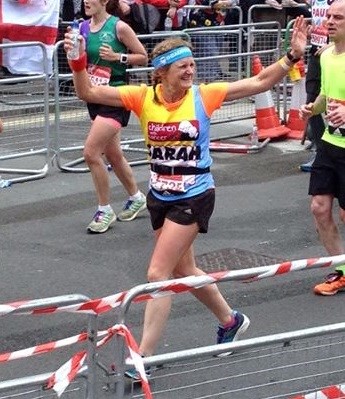 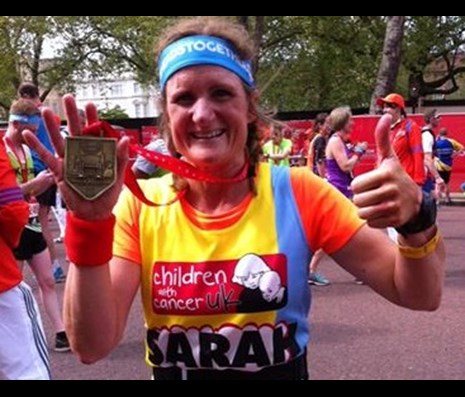